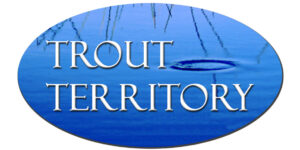 Safely release a wild trout back to the water

A little TLC please! We enjoy eating fresh caught trout, keeping only what we intend to eat. We promote catch and release, and if we are going to release our wild trout, we need to ensure that we do so in a manner that gives it the best possible chance of survival.

Here are some guidelines that we follow when handling and releasing wild trout.

Keep in mind that a trout has a better chance of survival after release if the trout is brought in relatively quickly rather than allowing the trout to tire or become exhausted. The use of heavier tippers, where possible, can help. The sooner the trout gets back in the water with a minimum of handling, the better it is for its health.

The use of landing nets in boards is very wise (there are soft and knotless varieties available, which are the best available for the well-being of the trout). Nets help prevent the trout from bumping or thrashing itself against the boat. The trout can be hooked while in the net, the net placed back in the water and the trout allowed to swim out.

The carrying of nets while wading or shore fishing can be minimised by learning the correct way to handle and release fish. I very rarely carry one when on foot fishing by myself.

The easiest way to release a trout is to use barbless hooks, which still maintain hold, especially when constant pressure through the rod is applied to the trout, and will come out easily with the use of forceps.

When using barbed hooks, pliers or forceps can be used to flatten the barb of the hook before use, still leaving a bump to gain some holding advantage.

If the barb is still fully intact, forceps can be used to remove the hook from the trout by grasping the bend and taking it out the way it went in without even touching the trout while it remains in the water.

Steer the trout to a grassy verge, sandy cove, or otherwise non-abrasive surface. As soon as you can, get the trout’s mouth out of the water and keep it there, it will quickly become submissive. Ideal time to utilise the forceps.

These methods revolve around not actually touching and handling the fish. However, sometimes you may need to.

Before touching the trout, always wet your hands and cool them down by holding them underwater for least several seconds.

Cradle the trout in the water, by gently holding one hand under its belly and the other (quite firmly) just in front of the tail, keeping it upright as in the picture above. Some practice here and confidence go a long way toward good control and great photos.

Don’t handle the gills of the trout; a fish with damaged or bleeding gills is unlikely to survive.

Don’t squeeze the trout’s body as this can cause internal injuries or damage its protective coating.

Taking photos of your trout

Leave the fish in the water (this is where a net is useful) while getting the camera ready, plan your shot and position, and pick up the fish at the last minute. Keep the fish out of the water for the shortest time possible.

When releasing the rout, it’s often not a matter of simply popping it back in the water. There’s some first aid to carry out first:

Hold the trout with the cradling method mentioned above.

Keep the trout in the position where it is upright and facing into the current. If there is no current, i.e. on a lake, gently move the trout forward and back through the water, to get the water flowing through the gills. This basically helps the fish to breathe. If the trout does not appear to be coming good, try gently moving it forward, lifting it up from the water, coming back to the start position and gently moving it forward again. This action can also be carried out with a trout that is in a net. Once the gills are moving, this is a good sign, as it is regaining its oxygen.

Cradle and work with the trout in this position until the fish has gathered its bearings, cleared its head and feels comfortable and strong enough to swim away on its own. You will know it is ready when it gives a wriggle or flick of its tail and wants to swim away.

Be prepared to stay in this position, nurturing your trout for as long as it takes. Often it’s only a moment or two, however there may be times when you could be there for several minutes. Often worth steering the fish away into clearer water every 15 seconds or so.

If the trout shows the tendency to want to lay on its side, or belly up, hold it upright, as shown in the picture above and continue to nurture it as described.

When it comes to catch and release, there are so many variables and scenarios: boat or shore, on your own, with other anglers, experience level etc. It takes practice.